It is fact the past Japanese empire during WW2 exploited a number of women of in its conquered territories as sexual victims with the name of “comfort women” during the times. The women who were forcibly abused by the military force of the empire had various nationalities such as China, Taiwan, Korea, Netherland, Thailand, US, France, UK and even in Japan itself, and proper compensations and apologies for their physical and psychological damages are not paid from Japanese government yet, successor of the empire.

In particular, this issue for South Korea, as the one of the most suffered state by the crime, is very sensitive and vigilant because the facts with a huge numbers of victims and national, historical identities. However the state is being swept by unwanted struggle over the issue now due to inappropriate actions by own government. 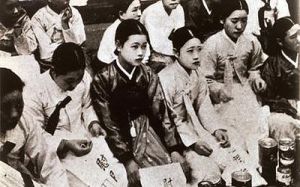 Last year’s swift settlement between South Korean and Japanese government over the comfort women issue in 28th Dec 2015 aroused huge angers and frustrations amongst the South Korean people. It is because the assignment promises the each of government cannot raise any of further speeches around the issue anymore with a compensation of a billion of Japanese Yen for all victims of South Korea, who are 45 persons now.

South Korean people insists it is totally kind of cajolement over the sin of history and is improper action of South Korean Government with meaningless amount of the money, which South Koreans don’t care whatever it is without sincere apologies from Japan.

It seems that the Park administration of South Korea has own reason over it. According to international relation experts, the agreement is for US’s the Far East Asia plan to block China with the two regional powers, as named as “right of collective self-defense”. But the problem in here is the people of South Korea wants to ask why the government treated those serious national issue without proper communication, and a billion of Japanese Yen as compensation was enough for victims psychologically and properly. Indeed some Korean politician said it was the result of poor diplomatic capability of the administration.

Since the agreement, a number of South Korean citizens are demonstrating against over it. Some of them are camping in front of the Japanese Embassy in Seoul as demonstration since last

December, enduring cold weather. They insist it is about not only for national identity but also for human right. However the government didn’t answer proper things over it.